Wow! We just finished our last weekend at Valens winter camping and it felt like it was still February! In fact, I’m sure we had warmer days in February! Look at how wintry our site looked! 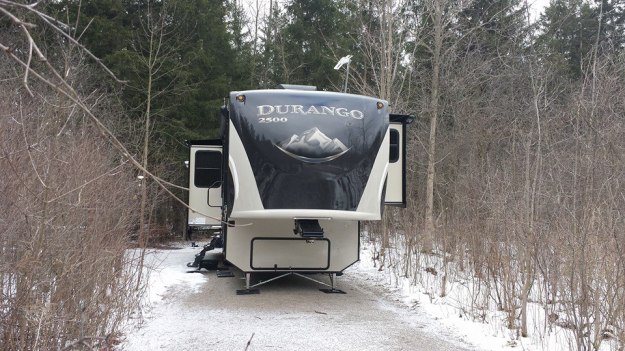 I wasn’t about to let winters recurrence dampen our last trip out! We had planned a nice final trip out celebrating with our friends who are also in the winter program. Saturday we spent most of the day around a campfire then a nice dinner cooked in the crockpot – Salsa Chicken. I baked cornbread to go along with it and man, it turned out great!

First though, let’s talk about our adventures, or I should say my RV plumbing adventures on Friday! I arrived as planned fairly early in the morning, got the fifth wheel ready with the heat on and unloaded the truck. After a couple hours when I thought the front pass thru was warm enough, I dewinterized. All went well! That is until I turned off the pump and changed the valves on the control panel to fill the fresh water tank. Water spewed everywhere! It was easy to see where it came from since we had taken the wall down in the pass thru! It gave us a clear view of the water pump, tanks and pipes behind the water control panel. One of the pressurized lines had a pin hole in it. 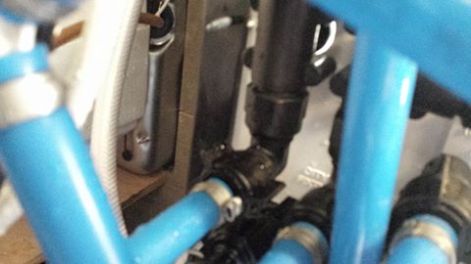 I had to choose between waiting for hubby to come up after work, or taking the piece off myself and trying to find a replacement. I opted for the latter choice and crawled into the pass thru. I tried a couple hardware stores in Cambridge then realized that it was a specialty part I’d only find at an RV store. Since I had to head back to Niagara to pick Dave up after work, I decided to call ahead to Niagara Trailers and see if they had the part in stock. They did, so I picked up one, plus two spares to keep on hand. Neither Niagara Trailers nor myself could determine if it was a freeze that put the hole in the elbow or a faulty part, so I figured best to be safe! Dave and I drove back to camp Friday evening and in no time, he had the replacement part on and our tank was full of water!

Saturday it stayed very cold but at least the sun was shining. That always makes things better! We started a campfire around noon and burned all day until we went in for dinner which we shared with our wonderful camping friends! We toasted a wonderful winter season at Valens! 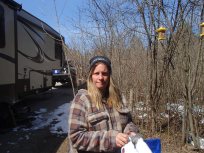 We woke to cold temperatures again this morning and a cloudy sky. A quick check of the weather and we determined we’d better get a move on and get packed up! An Alberta clipper was on its way!

After a quick goodbye at our friends fiver, we were on our way! Our campsite looked so lonely! Our drive home took about an hour and a half and we actually had relatively no issues putting it in the driveway. This is always a concern as we’ve already sustained damage to our house and the roof of the fifth wheel twice backing it in! To say I was stressed was an understatement! Between the super job Dave did backing it in and the changes we’ve made to the house and the driveway, I’d say it was the best back in so far since we’ve bought the new fifth wheel!

It’s kind of sad to see our winter season end, but it’s exciting knowing that our season of traveling is beginning in two weeks! We’re very thankful for the wonderful 23 days we spent at Valens this winter and are sure we’re going to be back in 2017 at our same campsite #56! We spent time with great camping friends and enjoyed many wonderful campfires and meals over the four months. The coyotes serenaded us on a few occasions and this past weekend – a mating grouse making noise in the woods.

Winter camping is not for everyone, that’s for sure, but it is for us and we plan on continuing to do it as long as we can, or at least until we’re retired and traveling during the winter. For us, the winter season has a beauty and peace of its own unlike the busy, loud, crowded summer season. Winter camping holds a special place for us!

In two weeks it’s on to Green Acres Park in Waterloo! Stay tuned for photos and a review of this new park we’re visiting.

5 thoughts on “Is It Really April?”