We spent a long weekend in August at Emily. The park itself was very clean considering it was packed full. The campground roads were pretty good too. The only complaint I had was that the park did not patrol well enough. One night during our stay, a pickup truck raced down the road beside us waking us up. Another night the noise of rowdy campers near us continued well past midnight. The site itself was supposed to be river front, but any view of the river was blocked by tall reeds and a row of large trees. Perhaps 30 yrs ago it was waterfront. I would not pay premium price again for a site like this. Emily is situated along the Pigeon River, which eventually leads to Pigeon Lake. We paddled and fished the river for a distance North. Along the way we found a really nice swimming hole.  Here are some pictures of our time on the water: 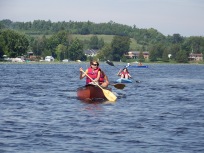 We went on a day trip to Lock 33 on the Trent Severn Waterway located in Lindsay.

We had a fun time at Emily. It was a very nice park with some good fishing and kayaking opportunities. Someday, we may be back here again to camp. Here are some links: