Our first month of winter camping is over. Including New Years weekend, we were out a total of four weekends in January. It would have been three, but we ended up sneaking in an extra weekend while I was on call at work.

New Years was a blast as usual! We arrived on the 30th and got everything set up for the season without any issues. We had the same campsite as last year which we really like. Our friends Derek and Tatjana hosted a New Years potluck which was a success as always! Good food and good camping friends! Weather wise it was a nice weekend. There was snow on the ground but it wasn’t overly cold. We hiked a bit and just enjoyed our first weekend in the winter program! Here are some photos: 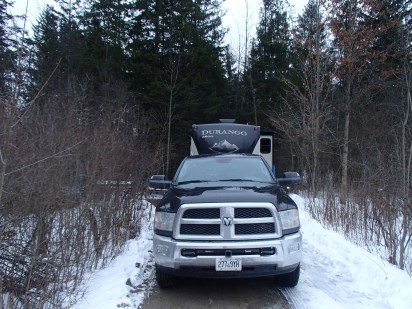 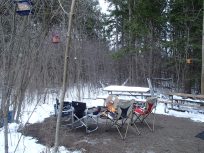 Tucked in for the winter!

I didn’t really take any photos during the weekend at Valens I was on call, but I did take some of the following weekend, the 13th. We didn’t seem to be at camp for long on the Saturday as we had to make a road trip into Cambridge to pick up marine carpeting for our boat, then off to Vaughn to pick up some other gear for the boat. We did get our outdoor time in though. It was cold and the lake was perfect for skating! Our daughter and son in law visited us to do some skating. It was an awesome time! 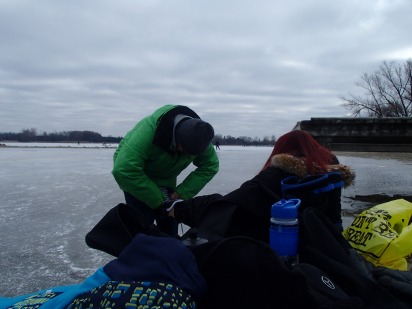 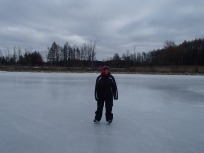 It remained cold for January but not bitter cold. Our last weekend of January, we still had snow on the ground.We didn’t get out skating at all, but hiked a few trails and just enjoyed the beautiful weekend at Valens. I really can’t complain about the weather, it was nice, wintry weather and at the end of the month, we still had snow on the ground! Here are some photos of our last weekend out in January!

There’s nothing like a warm fire on a wintry day!

Me enjoying the fire!

So ended the month of January camping. It looks like we’ll have two weekends out in February with 1 extra night on Family Day. Last year I had both Family Day and Easter off work, but this year I’m working both long weekends! March will see us at Valens more often, with three weekends, one being an extended holiday for me. Then, the season ends in April with two weekends of winter camping. It seems so strange to look at the calendar and realize we’re already halfway through the winter season!

Stay tuned for February at Valens and HAPPY WINTER CAMPING!!!