One of the first road trips we went on while at Sugarloaf Provincial Park was a tour of the Acadian Coast from Campbellton to Caraquet. Our deep sea fishing charter had been cancelled due to the rain and wind forecast, so we did the next best thing – road trip!

Our first stop along the way was the Inch Arran Lighthouse located in Dalhouse, NB. This lighthouse was built in 1870 and is still in remarkable shape!

The ocean was at low tide when we arrived here so we explored the beach and found some pretty neat ocean life. The birds were having a feast as well! Here are some photos of the cool rock formations! 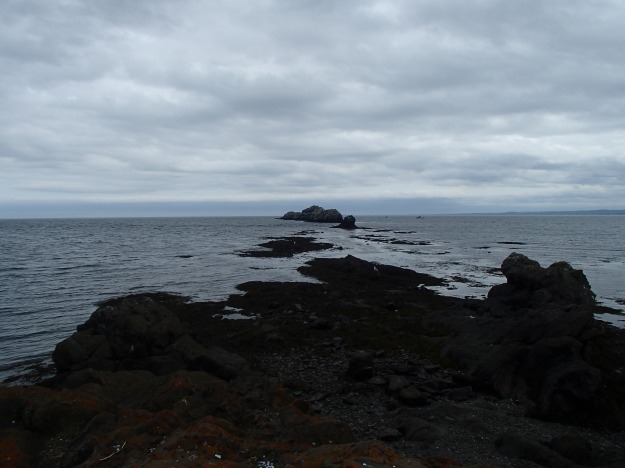 After leaving Dalhousie, we continued on through all kinds of little communities along the coast. The sky stayed gloomy and the rain continued! The next stop we made was at Pokeshaw Beach Park a very nice beach with some beautiful wind carved coastal scenery and a cormorant nesting site!

My first dip in the ocean!

We continued on the Coastal route until Caraquet. We’d been driving a few hours at that point and it was time to turn around. I loved the culture of the Acadian coast. We stopped at a couple souvenir shops and a pub along the way and everyone was so friendly. French seemed to be the first language they spoke, but once they realized we were Anglophones, they spoke to us in English. Such a pretty area!

We would have loved to continue driving on and wished we had a little more time to explore, but this trip we didn’t. Both of us felt so fortunate to be able to see what we did and meet some very nice people along the way! The weather certainly could have been a little better, but it didn’t dampen our spirits or take away from the fun day we had!

There is so much to see along the Acadian Coastal Tour and if you’re thinking of following it, I’d take a look on the New Brunswick tourism website.

For those of you that follow my web page, I’ll be adding a new post for each trip or adventure we had while in New Brunswick. Then, I’ll add a page for a campground review of Sugarloaf Provincial Park so stay tuned for more on our New Brunswick trip!