Wow, I can’t believe our 2015 season is over for camping! We would have pushed it one or two more weekends, but the fifth wheel had to go back to Niagara Trailers for some warranty and insurance work. So, we ended the season this past weekend at Fifty Point Conservation Area. Above is a photo of our campsite #66.

I decided that since I had the Friday off work, I’d tow the fiver out, back it in and set it up on my own. Mission accomplished without issue! It was a challenge in the high winds and driving rain but after I was all set up, I warmed up quick after a change of clothes and a warm coffee.

Eventually it did clear out with some sunny breaks which allowed for hiking and more exploring of the park. We didn’t take in the entire park when we visited back in July, so I wanted to see the areas we missed this time. I walked around the marina and found where the channel enters into Lake Ontario. I also found a nice hiking trail that skirted the lake. Beautiful!

Friday night it cooled off quite a bit and we needed to run our furnace. Yet another thing we’ve tried on our new fifth wheel. We did discover some issues with the water pump when we tried to winterize at the end of our trip. It was a nice time to find out as the fiver was being returned to Niagara Trailers after our weekend of camping.

Our campsite at Fifty Point had a 50amp hookup along with water and sewer. It’s always nice for a change to have full hookups. Usually we camp at provincial parks and have only 30amp service. Of course the trade off at Fifty Point is less privacy, closer to civilization and less of a “wilderness” feeling. It’s still a nice park though and we’ll be back here next year I’m sure.

The weather on Saturday turned out to be a lot nicer than Friday. A little cool still and somewhat windy, but the sun showed itself more often. Dave went fishing at the marina but didn’t catch anything. It looked like the salmon run was pretty much over by that time. We seen a couple sluggish salmon swimming and one dead one along the shore.

Our last weekend out was pretty awesome! In terms of nature, there were plenty of birds around our site including a beautiful red tailed hawk which was on the grass just outside our bedroom window. As well there were blue jays, robins, yellow finches and plenty more! One really cool thing we noticed while out on Saturday was a huge wasp nest in a tree. 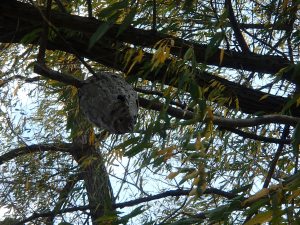 So ends our 2015 camping season! Our 2016 season begins when we park our fiver on our winter seasonal site at Valens on December 31st. Yes, we’ll be celebrating New Years Eve hopefully around a campfire for the first time ever! More to follow on the winter camping later!